Jow Ga is a system of traditional Kung Fu that was developed from three Shaolin systems; namely, Hung Ga, Choy Ga and Northern Shaolin Kung Fu. Jow Ga is known as Hung Tao Choy Mei because the system incorporated Hung Ga Kung Fu’s powerful upper body techniques and Choy Ga Kung Fu’s swift footwork and complex kicking techniques from Northern Shaolin Kung Fu. This system is suitable for all body types and can be tailored to each individual. The student can master techniques most suited to him/her. There are over twenty traditional hand forms, including tiger-crane and tiger-leopard. Additionally, there are over eighteen weapons sets including the staff, spear, chain-whip and double edge straight sword.

The founder of the system was Jow Lung. Jow Lung was born during 1891 in Hsin-Hui Sheng Sha Fu village in the Canton Province of China. Jow Lung starting learning Hung Gar at an early age from his uncle, Jow Hung Hei; who was a student of Wong Kei Ying. After the death of his uncle, Jow Lung followed Master Choy Gar Gung / Choy Kau (Chi Ching Tsai Kong) and learned Choy Ga Kung Fu. It took Jow Lung only a few years to master the Choy Ga Kung Fu because of his basics in Hung Gar Kung Fu. At the age of 18, Jow Lung had a difficult time finding a job in his hometown through the introduction of his townspeople, so he traveled to Malaysia (Singapore and Malaysia were one country at that time).

In 1910, Jow Lung and many others went to find work as miners in Kuala Lumpur. The bosses, who were described as gangsters, would often beat the workers. One day Jow Lung got into a fight with one of his bosses and fatally wounded him. Jow Lung fled to the mountains and found a temple named “Gi Leu” (“Kek Lok Si” in some accounts). Because he hadn’t eaten for many days and was exhausted, he asked an apprentice at the temple for help. The master of the temple Chian Yi, agreed to provide shelter for Jow Lung in the temple. Chian knew that Jow Lung had a natural talent for Kung Fu from the moment he saw him. Chian Yi taught Jow Lung Northern Shaolin Kung Fu and medicine.

From continuous practice, Jow Lung realized the uniqueness of the three styles of Kung Fu he learned and decided to combine them into one, thereby developing Jow Ga Kung Fu. Jow Lung felt that he would not be able to spread his family’s Kung Fu in Kuala Lumpur, so he went back to his hometown in China.

In 1915 General Lee Fook Lam of Canton needed a chief trainer for his army. He issued an open invitation for anyone interested to compete in an elimination tournament. Out of 100 applicants only Jow Lung had defeated all his opponents and was then appointed to the position. Jow Lung sent for his brothers to assist with the training of the soldiers.

In 4 years they taught and steadily refined the teaching methods and material into a new system which they decided to call it “Jow Ga Style”. Due to the system’s effectiveness and the fame of their fighting abilities, the brothers were honored with the title “Five Tigers of Jow Ga” (周龍五虎傳).

Sadly, in 1919 – Jow Lung, due to exhaustion from teaching and promoting the Jow Ga Style, died at the age of only 29 from Pneumonia. After his death the family met and elected Jow Biu to assume leadership of the system. Jow Biu resigned his position with the army and began promoting the Jow Ga system of Kung Fu. Within one year he had established 14 Jow Ga schools throughout China and within a few years the number had grown to more than eighty.

In 1936 the first school was established in Kowloon, Hong Kong. The Hong Kong school produced several notable masters. Among them, Chan Man Cheung, Lui Chu Shek, Wong Kun Leung, Lee Ngau and many others. Jow Tin and Jow Hip also came down to Hong Kong to teach, many of their disciples are still teaching in Hong Kong. Jow Biu’s disciple Chan Man Cheung was eventually elected as Jow Biu’s successor upon his passing and sent his own disciple Chin Yuk Din (Dean Chin) to the United States to continue the spread of the Jow Ga system.

Chin Yuk Din had many notable students, many of whom continue to run schools across the United States. One of his disciples and one of his first fully certified instructors was Randy Sullivan Bennett who ultimately moved to Sydney, Australia where he continued to teach Jow Ga.

The California Kung Fu Academy was established in 2018 by Nick Pang, a student, disciple and certified instructor under Randy Sullivan Bennett. Classes are suitable to anyone aged 8 and up with an interest in Kung Fu and a willingness to learn. CKFA aims to create an inclusive community for all of its members and as such a safe environment to learn this very diverse martial art.

Sifu Pang has a passion for martial arts and himself continues to study other styles and aims to incorporate elements of that into the school. He operates on a belief that martial arts need to continue to evolve and that each individual has their own contribution to make to this growth.

Sifu Nick Pang (Nick English) 彭凱璡师父
Sifu Nick Pang was born in Hong Kong in 1983 to an Australian father and Chinese mother. He began his martial arts training young, learning Taekwondo from famed TKD master Charles Mok. Throughout his life he studied various other martial arts including Arakan, Krav Maga, Wing Chun and Southern Mantis Kung Fu before meeting his Sifu, Randy Sullivan Bennett in Sydney, Australia. Sifu Pang dedicated himself, training intensively and soon became a full-time instructor and student of Sigung Bennett – his students ranging in ages from 6-65. In 2014 Sifu Pang moved to Hong Kong to continue his training. In 2016, he travelled to Kunyu Mountain in Shandong, China to train in Shaolin and Northern Mantis Kung Fu before returning to Australia late in 2016 where he was acknowledged and endorsed as a master and disciple of Sigung Bennett.
​
Sifu Pang now brings his passion for martial arts and his belief that Kung Fu is for everyone to California. Although only in his 30s, he brings decades of experience as a martial artists and years as a full-time instructor to the academy. He aims to create a friendly and inclusive community environment for students of the school to feel welcomed on their own Kung Fu journeys, personally guiding them to maximize their personal and martial growth. 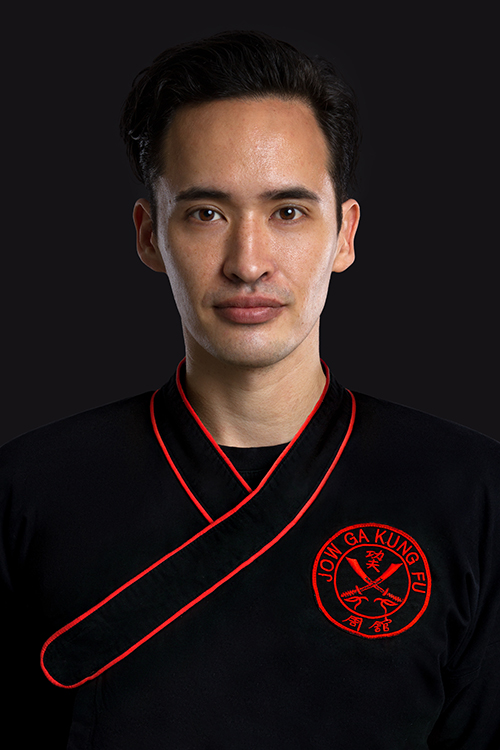 Kung Fu is for Everyone

Creating a comfortable and safe environment for students of all walks to learn traditional Chinese martial arts for purposes of fun, fitness, self-defense and community.